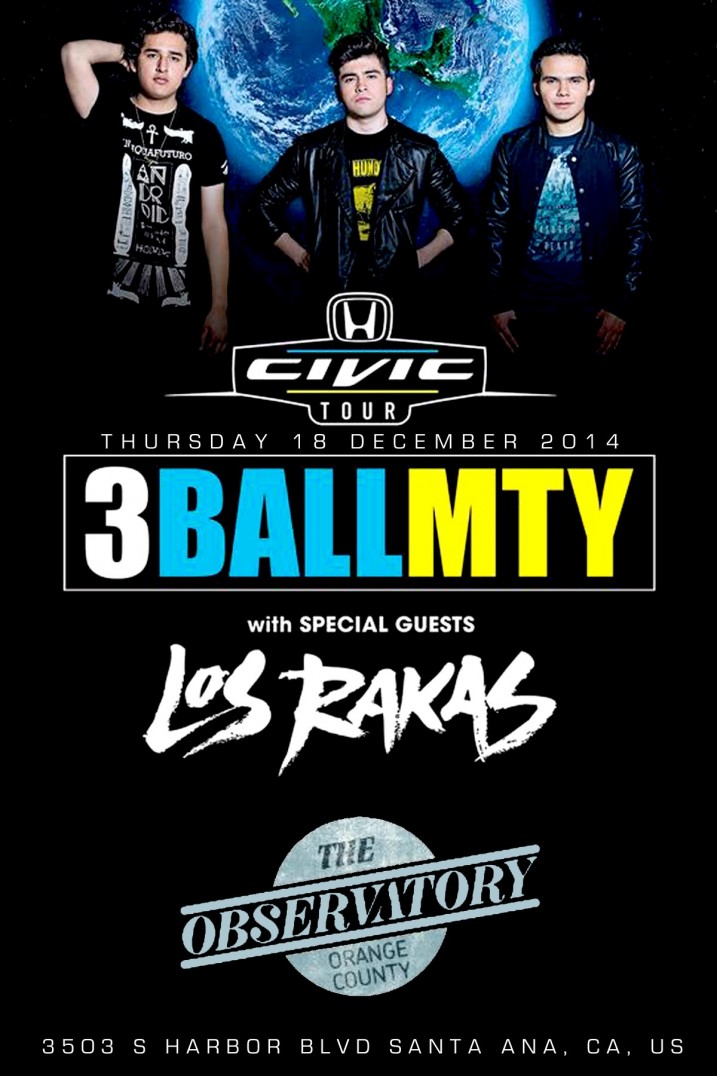 Much like any average 22 year old, 3BallMTY collective member and producer, DJ Otto, loves to sleep in late, go to the movies, check out his favorite bands in concert, and drive fast cars. The only difference is that he also produces hit music into the wee hours of the night in the comfort of his home studio. DJ Otto is part of the DJ/Producer collective behind the phenomenon known as 3BallMTY (pronounced Tribal Monterrey). Born on the internet, this DJ collective brought together three local Monterrey DJs, Erick Rincon, Sheeqo Beat, and DJ Otto who were all experimenting with tribal music in their early teens. “We were 15 and 16 year’s old and we loved tribal music. We were all throwing parties in Monterrey and one day we all connected and decided to work together to do bigger things in the local scene, that’s how 3BallMTY was born,” remembers Otto during a phone chat.

It wasn’t long however, before 3Ball’s catchy beats and new style swept the community and spread like wildfire to neighboring states and eventually made it the good ‘ol USA and beyond. “I remember we started to release our music for free we just wanted people to listen to it. Then one day I saw a video on YouTube and it was kids from the US dancing to our songs in their sombreros and pointy boots and I thought, wow that is so cool,” shares Otto.

Soon 3Ball caught the attention of massive Mexican producer, Toy Selectah and that was all she wrote. Their songs made it all the way to Germany and they were soon invited to play in Berlin, after the release of the massive hit “Intentalo” in 2012. “I think tribal is something so different from anything that was out there at the time, the percussion and the beats are super catchy and it spoke to people on a global level. One thing that made tribal so successful is that it easily crossed over into traditional regional Mexican music, but also into pop, and crossed over into traditional radio. People didn’t know what to make of it but it had their attention,” shares Otto.

Now in 2014, 3BallMTY is back in the news with their second album, “Globall”. “We are so proud of this album, it was a great personal goal of ours to release it and be so lucky to have such amazing artist collaborations on it. One of my personal favorites was working with Gerardo Ortiz who is known as “El Rey del Corrido” and such reknown names as Belinda and Li Saumet,” shares Otto.

One of the great things about 3BallMTY is that they are always creating music at the right place and at the right time. “The way the collaboration with Li Saumet happened was actually really funny, we were in Colombia met Li through Toy Selectah. One day she stopped by as we were creating music and casually grabbed the mic and started to sing. That’s how “Kaliente Kaliente” was born. We kept the recording locked away and it was actually one of the first tracks to make it into this album,” Otto shares.

This instance was no fluke as it happened again with the Latin alternative band Jotdog. “Similarly, we were at the airport after an award show and we were listening to some new beats we were trying out when we ran into the band JotDog. We had them listen to it and they asked us to send it to them. When they returned it with the vocals we knew we were going to use it for the album. Some of the best collaborations are those that happen organically. We didn’t plan them but the outcome was great,” shares Otto.

Overall, there is no easy way to describe 3BallMTY’s sound. It’s full of beats that will sound familiar to you if you’ve ever listened to traditional Mexican music, but you will see influences of rap, electronica, bass and so much more. While they’re boyish looks may remind you of a boy band they are music lovers to their core.

When asked about the future of 3BallMTY, DJ Otto stated, “We’re working on our third album with more collaborations and artists but we’re also looking to release a 6 song EP together to be released in 2015. With the EP we want to go back to our roots back to when we wrote songs and put them out for free. Something that focuses on melody and the tribal drops and very little else. I think our original fans will like it and hopefully everyone else too.”

You can see 3BallMTY performing live at the Observatory in Santa Ana, CA on Thursday, December 18th and at the Regent Theatre in Los Angeles on Friday, December 19th along with Los Rakas, Canyon Cody and DJ Ethos from Subsuelo!

Los Rakas
Los Rakas is comprised of cousins Raka Rich & Raka Dun, pioneering Panamanians by way of the Bay Area on the frontier of a new Latin urban sound. Known for their fresh mix of hip-hop, plena, reggae and dancehall music with both Spanish and English lyricism, Los Rakas represent the cutting edge of Pan-American flows.

VIVE LATINO 2016 Dates, Line Ups, Tickets
Written by:
12/4/2015
3BallMTY's "Globall" Tour with Los Rakas is Just What the Doctor Ordered
Written by:
Rocksario
12/12/2014
Kesta Happening LA coming soon!
Written by:
10/10/2014
like us on facebook!
promote your event or business with kestalosangeles.com
need tickets? visit our partner website tickeri.com
join kestalosangeles.com and stay up to date with all the top events